We were joined by members of the Edinburgh Botanists facebook group so we had a real mix of knowledge levels, from people who had only just arrived in Scotland and therefore didn't know any of the local plants, to serious experts in Edinburgh flora.

Unlike last year, our records will form part of the iRecord national database, thanks to the new New Year Plant Hunt App. 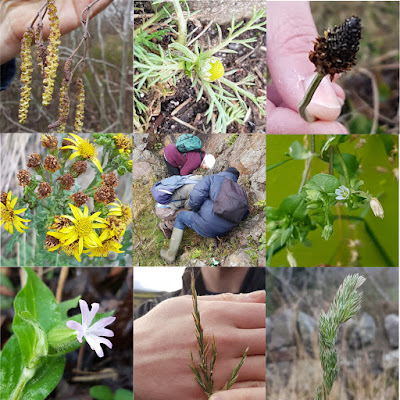 Despite our extra expertise, we didn't find quite as many flowers as last year, and it felt like they were harder to find, perhaps because of the cold spell before Christmas. It will be interesting to see how our results compare to those from around the country. 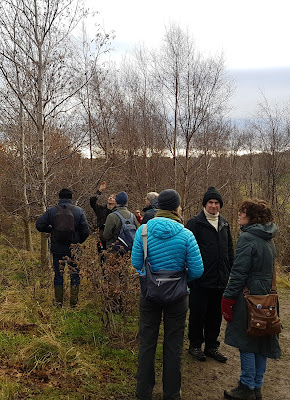 It was great to get outdoors and to have something to hunt for in the natural world, but I'm certainly hoping to have some more botany trips when flowers really are in season!

Eight members of Wild Reekie attended the drop-in session organized by Scottish Natural Heritage on the proposals for a marine bird Special Protection Area for the coast of south-east of Scotland stretching from Arbroath to St Abb's Head. The presentation was very well done without distracting visuals and reference to figures and statistics made only where necessary, although there were information leaflets covering SPA’s on all areas of Scotland.  It is hoped that through the presentations people will be more informed about the need to implement SPA’s and to engage in the ongoing consultation process. 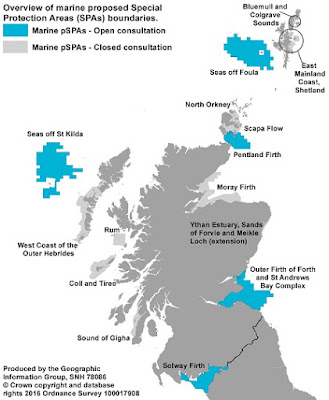 We were given a comprehensive talk on the need for a Special Protection Area and what was hoped would be achieved.  A lot of information relating to breeding and feeding habits of birds was given, not just on land but out on the open sea.  The subject of wind and under water turbines as well as wave power was brought up. Cameras and sonar equipment will be used to monitor the effects on sea mammals and birds that dive for food. It was also explained that other parties use the sea and ports for commercial purposes, fishing, shipping and leisure.  Consultation with those parties is an important part of the process.
It was also explained how governments (Scottish and UK) will be involved, particularly the area of the North Sea close to the Scotland – England border and the shared coastlines of Solway Firth. This also brought in the inevitable question about ‘Brexit’ and its implications regarding European directives and funding.  However, as the possible effects of ‘Brexit’ are still unknown not much could be said.
I think everyone in the group learned something and felt better informed about the proposals.  I certainly feel it’s important to include my views in the consultation process.
You can respond to the consultation on the SNH website here.
Brian Alexander

Follow our Meetup Page to be notified of future Wild Reekie events.
Posted by Eleanor M Harris at 08:51 No comments:


On a beautiful November morning, we went with Dr Adrian Sumner, expert in slugs and snails, to explore along the Water of Leith centre and Redhall walled garden. Despite being a bit late in the season, and many of the invertebrates having retreated to hide from the cold weather, we saw seven different species of snail and nine different species of slug, and discovered the variety and beauty of these underappreciated animals. 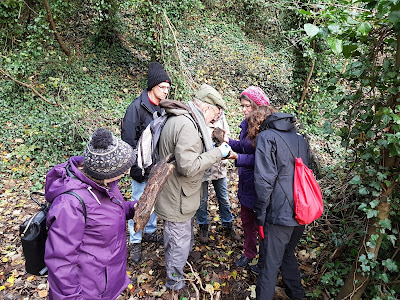 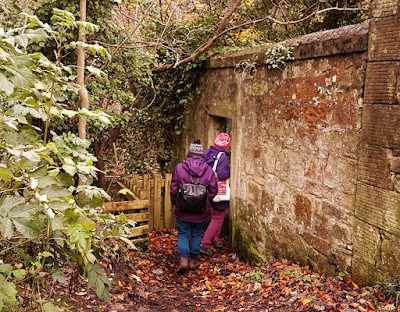 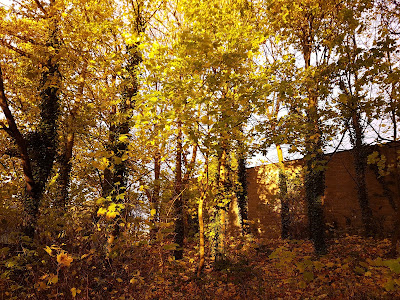 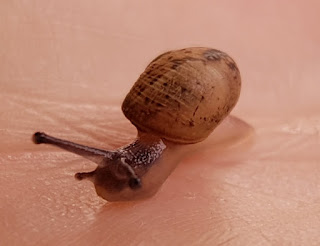 Many thanks to Adrian for lending us his expertise for the afternoon! If you are interested in finding out more about molluscs, have a look at the Conchological Society of Britain and Ireland, conchsoc.org. There are only about half a dozen mollusc recorders in Scotland, so they are badly under-researched, so if you are interested in contributing to knowledge of Scottish ecology you could make an important contribution.

Posted by Eleanor M Harris at 10:49 No comments:

On a beautiful October day, Wild Reekie member and birdwatcher Ewan took a group of complete novices down the Esk to Musselburgh Lagoons. 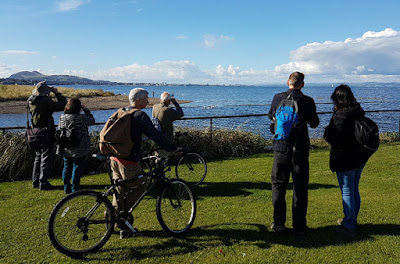 We saw a huge range of birds which sit there at high tide, including Oyster catcher, Dunlin, Redshank, Curlew, Bar-tailed godwit, Snipe, Lapwing, Grey plover, Teal, Widgeon and Grey heron. Canada goose, Greylag goose, Gooseander, Black headed gull, Herring gull and Lesser black backed gull were in the mouth of the river. Out in the Forth, we saw Merganser, Gannet, Eider duck, Swans and Cormorants. The grassland of Levenhall Links was full of Meadow pipits. 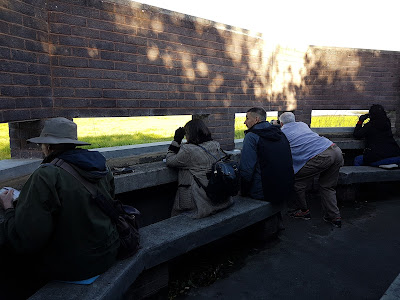 Many thanks to Ewan for leading such an excellent event: he couldn't have planned the weather, but the route, the perfect state of the tide, the knowledge of the birds we were looking at and the clear explanations all combined to leave a very happy group, with a much better knowledge of the birds that live around Edinburgh's coast. 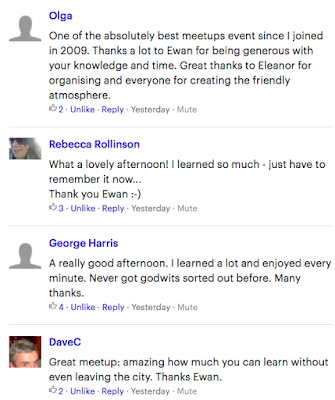 I hope Ewan will lead some more birdwatching events in future so sign up to follow our Meetup page for these and other events celebrating the wildlife of Edinburgh. 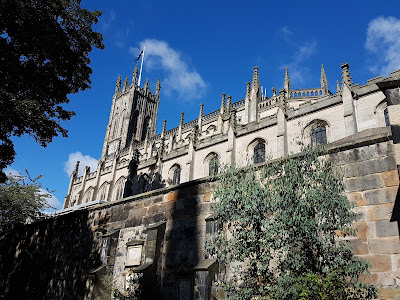 St John's Church, on the busy corner of Princes Street and Lothian Road at the West End of Edinburgh, might not be the most obvious place for a bioblitz - a survey of the diversity of wildlife at one place and time.

Yet the graveyard behind the church is a small oasis for biodiversity, with old trees and walls, varieties of shade, sun and slope.

Moreover, unlike most graveyards in Edinburgh, this one is managed by the congregation themselves. By understanding the importance of the site for wildlife, the congregation could easily take steps to enhance it.

This event was a collaboration between Wild Reekie and St John's. St John's was one of the first churches in Scotland to celebrate Creation Time in September, a month of focus on nature and the environment, which is being celebrated in more and more Christian churches around the world. 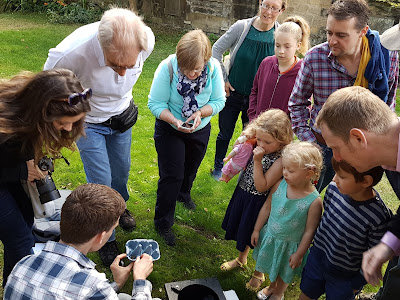 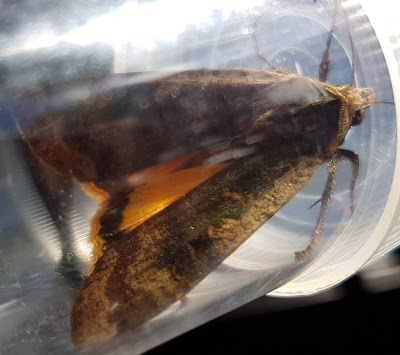 With limited time and skills, the list of wildlife was just a small proportion of the biodiversity in the graveyard, and many were not identified to species level, but it is fairly impressive nonetheless: 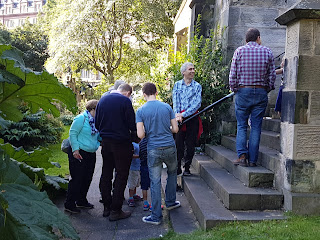 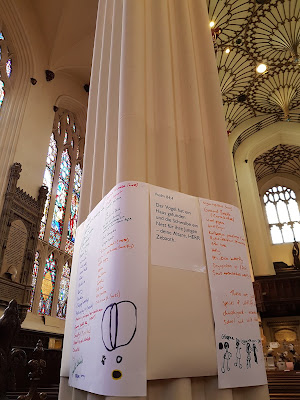 The list of over 50 species (illustrated by the Sunday School) is being exhibited inside St John's as part of the September display. Hopefully it will give the worshippers inside a sense that the users of their premises are far more diverse than the people. 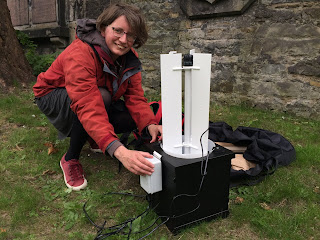 I'm just pleased the moth trap worked, after I set it up.

Posted by Eleanor M Harris at 11:07 No comments:

Email ThisBlogThis!Share to TwitterShare to FacebookShare to Pinterest
Labels: Ecology

Excursion to the Slamannan Bog Project

Today was Wild Reekie's first foray out of Edinburgh, to visit the 9000 year old peat bog which my friend Scott Shanks has been restoring in his role as Conservation Officer at Buglife.


The raised bog near Cumbernauld is the remnant of a mighty peatland that stretched all the way to Copenhagen - when giant elk could walk across it. We didn't see giant elk but we did see Giant wood wasps.


Over the past year, Scott has been overseeing the installation of peat dams to block the drains which have been being damaging the bog since the seventeenth century. These have been causing it to release carbon into the atmosphere, release pollution into the water, and lose its value as habitat for a unique range of plants and animals.

Just a few months after the dams raise the water level, and stop the peat from eroding, sphagnum moss and cotton grass began to re-grow, and dragonflies, darters, pond-skaters, whirligig beetles and other water-loving plants and invertebrates, recolonised pools and marshes which had been silent for hundreds of years.

We were able to contribute to the restoration of the bog by helping to fell some self-seeded Lodgepole pines which were encroaching on one edge.

When we started, the trees came up to just behind where this photo was taken. (Look there's me on the right!) 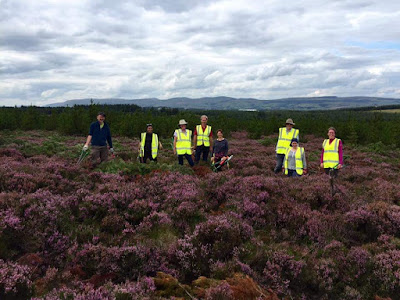 We were all inspired by Scott's passion and knowledge, and by the speed with which this degraded landscape was recovering and being filled with wildlife. 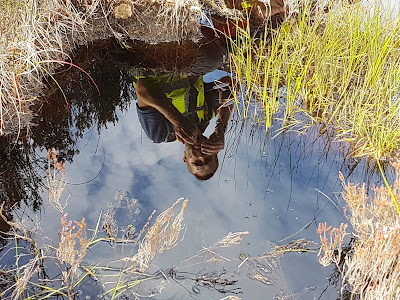 You can support projects like this by joining Buglife - it's only £2 a month - and I'd warmly encourage you to do so here.

Posted by Eleanor M Harris at 12:18 No comments: